Wireshark Installer hangs in the screen “Preparing for installation”, it does not throw any error. Wireshark requires x windows, but moutain lion does not ship with X11. You need to install it separately.

I spent quite some time to figure out this, as there is no post related to this. Hope you find it helpful. Watch the following video for detailed explanation on wireshark installation.

I have been using catch notes for the past 2 years. When I knew the news about catch notes shutting down “Catch will no longer be available after 30 August 2013.”, I started looking for alternatives. One of the best alternative is evernote. Though I have tried few years ago, but I havent used it effectively.

As per the above URL, exported my notes from catch.com

Though the exported data contains enex file to import into Evernote. It does not automatically add the pictures and tags.

As I had only few pictures in my notes, I manually added it to the notes in Evernote. But I had around 800 notes, I dont want to tag each and every note manually. So I wrote a simple python script to convert all the #tag to evernote tags.

In Django, get_or_create is not a thread safe method. So, it might results in racing condition. There is no standard solution available. More info on this issue in https://code.djangoproject.com/ticket/13906

Possible solutions from stackoverflow answer, and also better explanation about the problem

This means that if there are two simultaneous threads (or processes)
running create_or_update_myobj, both trying to get_or_create the same
object, then:

first thread tries to get it – but it doesn’t yet exists, so, the
thread tries to create it, but before the object is created…
…second thread tries to get it – and this obviously fails now,
because of the default AUTOCOMMIT=OFF for MySQLdb database connection,
and REPEATABLE READ serializable level, both threads have frozen their
views of MyObj table. subsequently, first thread creates its object
and returns it gracefully, but… …second thread cannot create
anything as it would violate unique constraint what’s funny,
subsequent get on the second thread doesn’t see the object created in
the first thread, due to the frozen view of MyObj table So, if you
want to safely get_or_create anything, try something like this:

Transaction.commit_on_success helps to get rid of frozen view of MyObj by creating new transaction.

by ramandv Posted on August 2, 2013
Posted in Django | Leave a comment

I have programmed in CSS too little. In this post, I will keep updating the things that I learned

I was trying to understand about SPDY protocol. I couldnt find simple tutorial about “what is SPDY protocol?” and “Why SPDY”. So thought of writing one.

As the name implies, it makes the webpages to load faster.

Increase the number of parallel requests to download faster

What is SPDY protocol?

SPDY is an application-layer protocol for transporting content over the web, designed specifically for minimal latency.

SPDY allows for unlimited concurrent streams over a single TCP connection. Because requests are interleaved on a single channel, the efficiency of TCP is much higher: fewer network connections need to be made, and fewer, but more densely packed, packets are issued.

Although unlimited parallel streams solve the serialization problem, they introduce another one: if bandwidth on the channel is constrained, the client may block requests for fear of clogging the channel. To overcome this problem, SPDY implements request priorities: the client can request as many items as it wants from the server, and assign a priority to each request. This prevents the network channel from being congested with non-critical resources when a high priority request is pending.

SPDY experiments with an option for servers to push data to clients via the X-Associated-Content header. This header informs the client that the server is pushing a resource to the client before the client has asked for it. For initial-page downloads (e.g. the first time a user visits a site), this can vastly enhance the user experience.

Rather than automatically pushing resources to the client, the server uses the X-Subresources header to suggest to the client that it should ask for specific resources, in cases where the server knows in advance of the client that those resources will be needed. However, the server will still wait for the client request before sending the content. Over slow links, this option can reduce the time it takes for a client to discover it needs a resource by hundreds of milliseconds, and may be better for non-initial page loads.

BTW, SPDY v2 has been adopted for HTTP2.0

Currently, SPDY protocol is being supported in port 443. It could have been implemented in other ports, but because of the risk of that port being firewalled and transparent proxy issues, port 443 is being used.

During the TLS handshake (specifically ClientHello and ServerHello), TLS extension Next Protocol Negotiation (NPN) is used for the server to advertise a list of protocols it supports. As of now www.google.com is sending spdy/3 spdy/2 http/1.1. The client chooses which to use.

If a spdy protocol is selected, TLS transports SPDY. If http/1.1 was chosen, TLS transports HTTP, as it does for regular https sites. If a client does not advertise that is supports NPN the server should assume an http/1.1 connection. 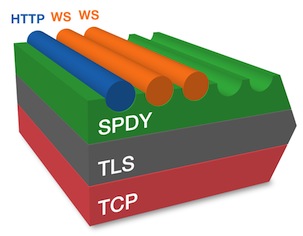 Can I use the SPDY protocol?

How to know the SPDY protocol support?

Use the following addons, to know whether a site supports SPDY or not.

In addition to this, Chrome helps to view the SPDY sessions in the chrome browser, just type the following URL

by ramandv Posted on July 6, 2013
Posted in performance | Tagged spdy | Leave a comment

By default, ng module will be loaded during unit testing. But our modules should be loaded explicitly with angular.mock.module.

The angular.mock.inject function wraps the function into an injectable function. Basically, it will inject all the necessary parameters.

For example, you want to test moduleA, but it depends on other modules also, then first, you need to load them as follows

Then, You can inject the services from these modules as follows

If you want to mock the service, there are 3 different ways. Check the following post

There are somany tutorial available on how to write unit test. So you have writtern one simple unit test, but want to know the connection of jasmine, karma and angularjs.

Basically, to test a single angular controller/service etc, you need to make it as page. And include all the dependencies like jasmine, angular and your source files.

This service/controller will be called in your tests. So, include those tests in that page. Now, this tests should be called, which will be performed by jasmine specrunner.

But, if you use karma, creation of this page, launching browser will be taken care by editing a simple config file. It provides many additional features also.

If you encounter this “TypeError: Converting circular structure to JSON”, check whether you are trying to $watch any object which has circular reference. It could be the culprit.

. You might get the above error, if the order of files [moduleA-part1.js, moduleA-part2.js] is changed,

by ramandv Posted on June 16, 2013
Posted in AngularJS | Leave a comment

Install Haystack with his dependency pysolr

Install the solr-4.2.1 by following the steps

I always open multiple tab to launch server, mysql shell, ipython shell etc. Every time, setting the virtualenv etc in the shell and start server etc is a pain, which resulted in the following iterm2 applescript.

The following iterm2 applescript helps to launch the multiple tabs in iterm2 . And you can name the tabs. In addition to that, You can launch the tab with some start commands too.

Add the following snippet in your ~/.bash_profile file. It add the function to rename your tab.

If the renaming tab does not work, check whether your .bash_profile modifies the PS1 variable. You might need to comment out the following snippet.

Installing the iterm2 applescript as an application